Havering Half Marathon - A New Beginning

My first race in over 3 years and I was standing in the middle of my former secondary school playing fields recalling how long it had been since I felt nervous about a race.

I've never blogged about what happened to me injury wise that stopped me running properly over the past 3 years but suffice to say I have taken a huge step back fitness wise but a huge step forward in terms in terms of mental strength..more on this in a future post.

For the past 4-5 months I had been rebuilding my fitness using the MAF method  If you are not aware of this approach I strongly recommend it for both Health and Fitness.

On the 6th October I would finally stand at the start line some 3 1/2 years since my last race, "The Havering Half Marathon". The race is the first of its kind in nearly 25 years, the course generally flat and I was almost certainly familiar with every twist and turn it offered. 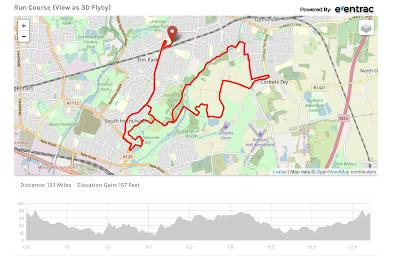 It was a classic autumn day - 15C, very much shorts and vest/t-shirt weather although I saw many in full windproof jackets, hats and more!

"So what pace you going to run at?" a friend of mine asked me. To be honest I wasn't really sure especially given that Chelmsford Marathon was only 2 weeks away I didn't want to screw myself to the wall. Once the starters gun went off there was a lot of jostling for position but as as soon as we hit the road I settled into a pace just under 8 minute miles.

The early miles passed fairly quickly and I felt good effort wise at the pace I was running.

At around the 5km mark we headed up Ingrebourne hill (not much of a hill but it did slow a lot of people down). This caused a bit of queue so I put some effort in here to skip around people ahead before hitting the downhill solidly, I didn't want to get blocked in and the legs felt great going up and down, god it was great to be racing again!


At around 7 1/2 miles we headed up through the town of Upminster and I could hear and see a lot of friendly faces as close friends had been following the race.

Having reached this point of the race the marshal was shouting 'we all looked good' and that we had reached the 8 mile mark. I quickly noted on my watch that I had covered 7.7 miles. Surely this was a mistake, I know GPS always carries a margin of error but this was some difference. Never the less I pushed on and was holding pace pretty consistently.

Miles ticked by and I was enjoying running over familiar ground that I run pretty much on a daily basis. I reached the country park knowing the last 5km of a half marathon always requires a 'big push'.  Running through the park the local support was great to see especially familiar faces. I was still tracking around 8 min miles but my heart rate was over 170 now and I knew that I couldn't push things much more.

As I made a turn into my former secondary school at the 13 mile mark I could hear someone on my right hand side huffing and puffing as they began to put in a final push. This was all the incentive I needed to pick up the effort and zoomed forward dropping both the runner who was making a push and passing two other runners in the process before literally jumping through the finish line. I couldn't help but smile.

Official time - "1.41.52" but it was a short course, showing up 12.8 miles on my watch but it still it was a great day out and had there been another 0.3 miles I wouldn't minded at all.  I waited at the finish line to see countless friends coming through giving them a high five and congratulatory hug with many achieving their own personal race goals. It's always great to see.

Finally it's definitely an understatement to say that I had missed everything that makes race day so special. Training wise it's not been as consistent as I could have been for the past 4-5 months but I was very grateful to be able to stand there at the end and come out the other side.

There is a quote by the legendary runner 'Ted Corbitt' that for me sums up a lot of 'why' I run and I can positively say there were many people out there who I'm sure would believe the same having come through the finish line.

Roll on the Chelmsford marathon! 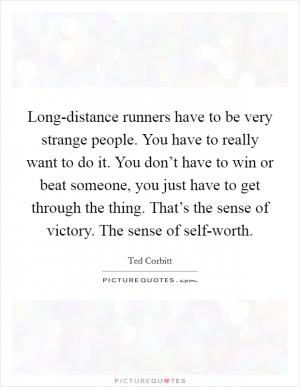 Richard S
This blog is about my running journey. Since starting to run back in 2008 I've run 5k's to 100 milers. I enjoy running in new places , eating well and celebrating as often as possible.